I’m moving up in the world. I recently told you about my name finding its way to the pages of the Southern Poverty Law Center’s website, following the DC Free Speech Rally. Now the Anti-Defamation League has joined the party, listing your humble correspondent along with others they perceive to be at the top of the Alt-Right/Alt-Lite factions of what might be described as the “New Right”.

In their piece they describe me as follows;

Christopher Cantwell runs Radical Agenda, a racist, “pro-European,” internet radio show/blog that touts its pay-to-view content as “common sense extremism.” Cantwell has a history of promoting anti-police and anarchist rhetoric, but has recently moved toward the extreme right, and spoke at the neo-Nazi gathering in Pikeville, Kentucky. He has interviewed and appeared alongside white supremacists Mike Enoch and Matthew Heimbach, and has written that he abandoned libertarianism for the alt right after seeing that the latter “has better memes.” At the June 25 Free Speech Rally in DC, Cantwell urged the crowd to fight “Jewish influence.” 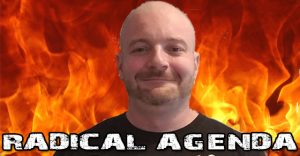 This indicates to me that they’ve done their homework, even if they’ve chosen to purposely misrepresent a few things. Not that these folks have ever been known for that sort of thing.

I think we’re going to have a lot of fun with these guys. Their entire existence is based around destroying people’s businesses and reputations by smearing them as racists and anti-semites. I have long said that guys like Spencer and Enoch have all these people looking at them, but no apparent clue how to monetize it. If the ADL and SPLC want to tell people about me, that’s quite alright with me. They can even continue their usual pattern of misleading the public, so long as they keep on putting my name into search engines.

Why? Because my business model plans on exactly this kind of marketing, and I am going to spread this business model far and wide until these idiots realize it is no longer in their best interests to harass good white folks.

So join us, this and every Wednesday, as well as Mondays and Fridays from 5-7pm Eastern for another exciting episode of the Radical Agenda. It’s a show about common sense extremism where we talk about radical, crazy, off the wall things like the Anti-Defamation League.

I’m still banned from streaming to YouTube. Catch the live video stream on UStream. Listen live on the TuneIn app! Got Roku? We’re on there too! Or add the raw stream to your favorite streaming app! Get the podcast on iTunes, Stitcher, Google Play, Roku, RSS, or RadicalAgenda.com.

I keep the lights on here by selling premium memberships, as well as bumper stickers and shirts. I also solicit donations, and encourage you to shop through my affiliate links. Without that support, this show will cease to exist.